These are a few of my favorite things

One of the things that I like best is music-especially new music. In that spirit, I would like to share a few of the new artists that I have found in the last year or so. Click on the album art to get more info.

Amos Lee
Amos Lee is a folk/jazz singer. This is his first album. It is soft and lovely with emotion throughout. He recently put out a new album. I have heard some of the tracks, but don't have it yet.

The Jayhawks
The Jayhawks are actually a Minneapolis band. They have broken up, but the music that they made when together was great. It is alt-country with harmonies and songs that make me think of CSNY or The Band.

Wilco
First, I am not a "true" Wilco fan. Wilco fans are kind of cultish and crazy. Wilco started out as alt-country, but their lead singer, Jeff Tweedy, is apparently responsible for their divergence into more alternative/atmospheric music. "Summer Teeth" is my favorite of what I have heard. It is definitely alt-country, even folksy.

Uncle Tupelo
Uncle Tupelo are the "Fathers of Alternative Country". Their first album was titled "No Depression". The genre that they spawned was then actually referred to as No Depression. They broke up (think Behind the Music) and Jay Farrar and others started Son Volt. Jeff Tweedy took the rest of the band and started Wilco.

Well, that's all for now. Let me know if this type of post is at all interesting. Thanks for reading.
No comments:

Woe to the Internet

Sometimes I hate the Internet. Through a tracking website, I can see pretty much everyone who has come to the blog. I can see what site referred them, how long they were there, how many page views, etc. The title that I gave to one of my posts was "Out of the mouths of babes." Yesterday, a few people came to the site because of the word "babes". Ugggh. They didn't find what they were looking for so they didn't stay long. I have since changed that tag to "bcm". You'll see that listed on the right side of the page. That's where I'll put all of the fun stuff about the boys.
1 comment: 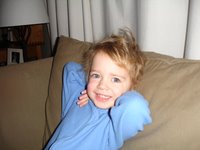 This morning, I was on the couch listening to one of my podcasts, when I saw a little head laying on the ground, peeking around the corner. Like most days, Caleb was the first one up. It is always fun to have a little time alone with him or Benny in the morning. We sat on the couch, talked, watched his favorite Lego Star Wars video. He often quotes, with his most serious face, where Obi-Wan Kenobi says to Anikan, "It doesn't have to be this way."

I had to get a picture of his hair this morning. We have been growing it out a little. We think it looks pretty sweet.
2 comments:

On April 24 of last year, I met one of my newest best friends. la la. It is a CD trading website. The idea behind it is that all of us have a bunch of music that we don't listen to anymore and would like to have other music that we would listen to more. la la facilitates just that. You post all of the music that you want to get rid of and make a list of all of the music that you want. la la tells you people that want your CD's. Then you send them out in little postage paid envelopes to people all over the country. The more you send out, the more you get. All I pay is $1 per CD I receive plus $0.75. To date, I have shipped 60 CD's and received 60 in return. It has been an amazing thing. It has totally shifted my CD collection. So for all of you out there who haven't bought a CD since Counting Crows' "August and Everything After" (Ben Arendt), jump on board. Post a comment and I'll send you an invitation. It will change your life.
1 comment:

Out of the mouths of babes 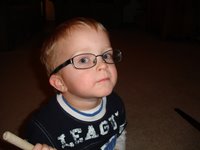 Last night we were on our way to play Candy Land. Ben said, "Let's put it on the table so Matthew doesn't jack it all up." Completely serious. Didn't even crack a smile.
2 comments:

Check out this great post from Gregg and Allison's blog about Caleb. Its super!

As a part of the refining of AAbcm, we are working on a new banner. Gregg Nagel, Amanda's brother and the artist in the family, has put the following banners together. I need your help though. Please post a comment and vote for which one you like the best. Thanks again, Gregg. Thanks for

I just put all of our Christmas music on the iPod. I thought you might enjoy a brief rundown. Click on an image for more information. Thanks for reading. 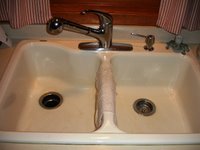 I have cleaned up the kitchen the past two nights. Usually I spend time with the boys while Amanda does this, but the other night I happened to do it. Last night Amanda said, "Would you clean up the kitchen again. You do it so nicely--just like your mom. The sink is so clean." I was pretty proud of that. So I got my Sharon on and got to work. Finally all those nights of washing the dishes after dinner with Tricia and Joey have paid off. See how it sparkles! Thanks for reading.
1 comment:

A Day of Thanks 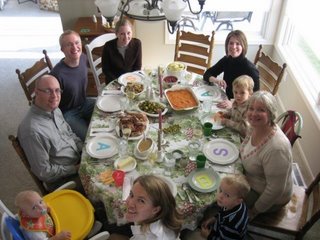 This weekend was a culmination of a very fun month for us. Every night at dinner we would ask the boys what they were thankful for. The following is a representative list.
We had a great weekend of family. Gregg and Allison were up from Indianapolis. We had turkey with Shube and beef with Dave and Joni. We ate a lot. We have a lot to be thankful for. Thanks for reading.
2 comments:

Welcome! I have been blogging now for almost a year. It was one of the first things that I brought on board at Century when I started here in February. This is my first post though on behalf of the Gammons Family. I look forward to sharing all of the things that we are learning, trying, experimenting with, watching the boys go through, and how God is working in our lives and stretching us. Thanks for coming along. Thanks for reading.
2 comments: