If you grew up in a Christian home during the 1980's, chances are you are familiar with Psalty the singing songbook.  If you're not, here's some background.  In 1980, The Kid's Praise! Album was released.  It was the story of some kids finding a talking big blue song book at a playground.  The book was sad because no one would sing his songs.  He was happy when the kids sang the songs from their heart and praised Jesus.

There went on to be 10 Kid's Praise! albums.  My family only got through number 4.  We had the first two on record.  When Amanda and I got married she brought a couple of the older ones into our marriage.  We have purchased a couple of the older ones on CD for the kids and they love them.  It's hilarious because even on the CD at the end of the middle song, Psalty says, "Okay kids.  It's time to turn over the record!"  These albums can be credited with popularizing many songs from that era.

You can find a wikidpedia article about Psalty here.  And you can still get all of the albums on CD here.

My only critique of all of this is that it's pretty typical 1980's evangelical Pelagianism (the idea that we are basically good and therefor "man has the ability in and of himself (apart from divine aid) to obey God and earn eternal salvation.")  Lots of the things that Psalty says are admonitions to work hard at reading your Bible, praying and being a good person, basic moralism.  This is the kind of teaching that was so difficult for me growing up, so when I hear it, it really grinds me.  I wish Psalty would say, God loves you even when you don't do these things.  He died on the cross for you because no matter how much you do any of these good things, you will never be acceptable to Him.  But that's a different blog post.  I really love these CD's.  Check them out.
5 comments:

We have listened to The Cricket in Time Square  and even watched the cartoon movie.  We had never read the book though.  It's well written book about a cricket who moves from Connecticut to the Times Square subway tunnel.  He meets a mouse and a cat and learns to play classical and popular music.  The boys loved this one.  They had been wanting to read it for a while and we finally got to it.  This a good one for all aged kids.
1 comment: 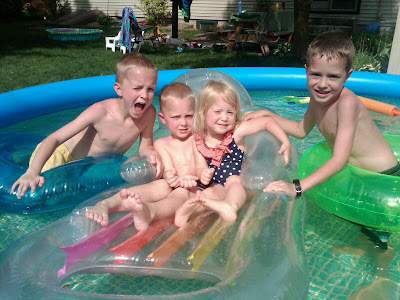 Anyway, it's that time of year again.  It does seem like were about two to three weeks early, but when the thermometer reads 90 degrees, I'm putting up the pool.  The kids love it.
4 comments:

Hymn of the Week--I Love To Tell The Story

I wanted a hymn about redemption this week.  I wanted a hymn that reminded me about what Christ had done for me.  Yesterday I went to the funeral of a woman from church.  Her daughters are our babysitters for small group every other Sunday.  I had never met her.  She died after a 16 month battle with cancer.  The funeral was a wonderful time of "glorifying God and remembering the life of MP."  I love the two sidedness of that theme.

MP wasn't perfect.  I read her blog for the past year and she never claimed to be.  She was like me, a sinner.  That's what makes the old, old story even sweeter.  It's not about ANYTHING that I've done or that MP did.  It's all about what HE did for us.

Romans 5:7-8
For one will scarcely die for a righteous person—though perhaps for a good person one would dare even to die— 8 but God shows his love for us in that while we were still sinners, Christ died for us.

1John 4:10
In this is love, not that we have loved God but that he loved us and sent his Son to be the propitiation for our sins.

Give the song a listen below.  I love the harmony of the Chuck Wagon Gang on this old hymn.


Hymn of the Week
I Love To Tell The Story
Words by A. Katherine Hankey
Music by William G. Fischer

Refrain
I love to tell the story, ’twill be my theme in glory,
To tell the old, old story of Jesus and His love.

Labels: Hymn of the Week

Our last book was a great one.  It was about a young man who wanted to become a great painter.  Caleb loved it from page one.  The Apprentice by Pilar Molina Llorente, is a great read.  It is short, but very interesting.  The young boy who lives with his father, a tailor, longs to become a painter.  His father gives in and sends him to become the apprentice to a famous artist in the city.  He is ill treated and not taught anything, until he discovers what is behind the locked door at the top of the stairs.  Get this one at the library and enjoy it with your kids.
No comments:

For all you mini-van moms and dads out there!  REPRESENT! 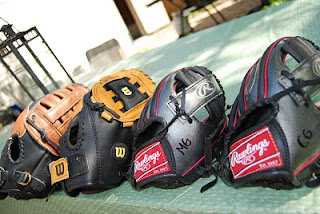 I was not one of those guys that always dreamed of having boys.  I don't think I would have cried if we had three girls first.  But having now three boys in the house that I can play with is sure a lot of fun.  We were outside today and I was hitting balls to them.  I found myself saying things like, "Get in front of it!," and "Don't be afraid of it."  The ting of the aluminum bat on the ball has a beautiful tone.  I'm looking forward to this summer and more fun with the guys.
4 comments:

I am currently listening to the audiobook of Swiss Family Robinson by Johann David Wyss.  I am loving it.  A year or so ago we watched the old Disney movie and really enjoyed that as well.  If you've never read/seen it or if it's been a while, the gist of the story is that a family (mom, dad and four boys) is traveling to an island when their ship is caught in a storm.  The crew abandons them and they eventually end up on a deserted island.  Once on the island they devise all manor of inventions that help them live.

Two things I really love about this story are first, in the book they highlight much more that the family are Christians.  They were traveling to become missionaries when the story began.  Constantly the author refers to God's providence and the family's thanking God for his care of them.  Second, I love the masculine nature of the book.  What could be better than four boys finding an island, building a tree house to live in and taming animals.  This is every boy's dream.  The book was written in the late 19th century and so the gender roles are very traditional.  The mother is no Victorian era prude though.  She is the one that came up with the idea of building the tree house.  She carries a fire arm and knows how to use it.  She is the picture of a strong and capable woman.  If you have boys at your house (I think girls would like it too.) read them this book.  Or at least, rent the movie and watch it with them.
4 comments:

Hymn of the Week--Just As I Am

I told the boys that this was a very famous hymn from when Billy Graham would preach his crusades.  I've got to admit though that every time I sing it, I think of Mike Wooten saying, "The buses will wait while the choir sings one more stanza of 'Just As I Am.'"  I don't remember the context, but it still makes me laugh.

Hymn of the Week
Just As I Am
Words  by Charlotte Elliot
Music by William B. Bradbury


Just as I am, without one plea,
But that Thy blood was shed for me,
And that Thou bidst me come to Thee,
O Lamb of God, I come, I come.

Labels: Hymn of the Week

LipDub at Calvin College from Rachel Kuyvenhoven on Vimeo.