For Christmas, my mom got the boys and me tickets to the Vikings.  Unfortunately, the Metrodome collapsed and they moved the game to Detroit.  With the refunded money my mom got us tickets to a University of Minnesota men's basketball game versus the University of Michigan.  The game is going on right now.  I'm home with my ankle.  Amanda took the boys and as you can see from the picture below, it looks like they're having a GREAT time. 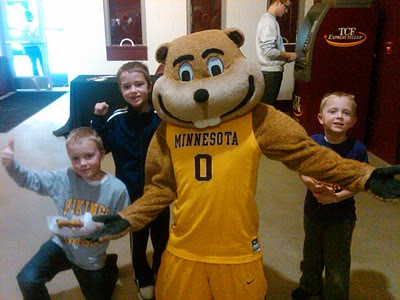 You may remember my battle last year with the ice when I fell skating and took an ambulance ride to the hospital.  Ice: 1.  Andy:  0.

Well yesterday after we got back from our trip to Chicago, I went out to snow blow the driveway.  On my way over to the neighbors to get the machine, I hit some snow covered ice, went down, my ankle doubled under me and I began to bellow.  The neighbor lady ran over, offered to call 911, and then helped me into the house.  Long story short, after a trip to the urgicare for an x-ray, I was told that I broke my fibula.  Thankfully, the doctor said it was a clean break, so he doesn't think I'll need surgery.  I see a orthopedist on Friday though to make sure.  Now I'm laid up with one of those sweet boots.  It hurts a lot but the pain meds help there.  Amanda is taking amazing care of me and the kids are helping out too.  I'll keep you posted.  In the mean time, watch your step.   Ice: 2.  Andy:  0. 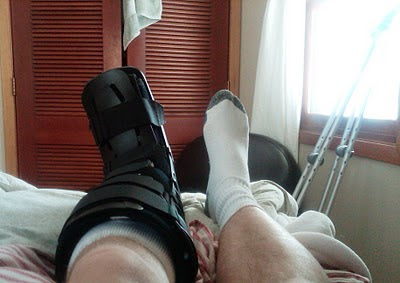 I have been using this tool for a while and it is absolutely amazing.  When I've recently asked a few people (even one of my techie friends) if they knew about it, they said no.  Bing Maps is a lot like the more popular Google Maps, with one exception--Bird's Eye view.

I use this tool all the time to look at real estate especially.  It's a great way to see what the whole neighborhood is like.  Go to Bing Maps, enter an address, switch to bird's eye view and then zoom in. The view defaults to "Road".  That's where you'll change it.  Once you're there, you can rotate it and see a view from each cardinal direction.  It doesn't have bird's eye for everywhere, i.e. Wabash, IN. But if you live in a metropolitan area, you're probably covered.  Next time you want to see where something's at in detail, give it a try. 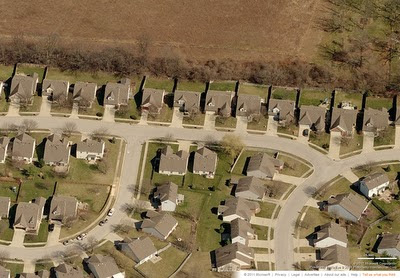 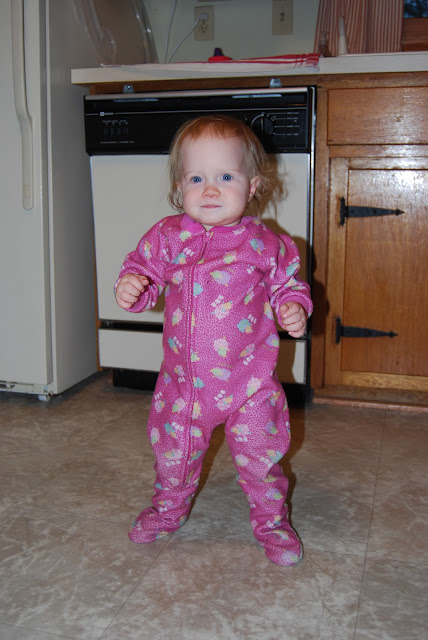 Not yet walking, but beginning to stand by herself.  Before too long, she'll be cruising around even more closely after her big brothers and sister.
3 comments:

Welcome Eden Rose Falder into the world.  Congratulations to the whole Falder clan.  We love you all.  Thank you God for a safe arrival for baby and for protecting Tricia (my sister).  Click over to their blog to see more pics.

Read Aloud--Paddle To The Sea

Paddle to the Sea  by Holling C. Holling is a great book, especially if you grew up on the shores of one of the Great Lakes like I did.  Our kids have spent enough time in Michigan and on the lakes to enjoy it as well.  It is the story of what happens when a young Indian boy in Canada carves a canoe and an Indian paddler.  Paddle to the Sea, as he is named, then makes his way from the small brooks of his home, through all of the various Great Lakes to the Atlantic Ocean.  Along the way he meets loggers, ore boatsmen, children, and people playing in the various lakes.  Each time they pick him up and read his hull that says, "I am Paddle to the Sea.  Please put me back in the water."  The illustrations are all really great.  They have small drawings in the margins about the place that Paddle is visiting.

Apparently there is an old school film about the book.  I found it on Youtube.  I think the kids would love to see this.  We'll have to carve out some time some weekend soon.

The Cross and the Jukebox

I'm always interested when I see someone talking about common grace in music.  I get even more interested when someone is talking about good country music.  Rusell Moore recently started a weekly podcast entitled The Cross and the Jukebox.  He talks about the intersections of religion and country music.  So far it has been very interesting.  He references many times the "Jesus haunted South": the idea that everyone in the southern US has some idea of Jesus and Christianity in the recesses of their past.  If you've got an extra half hour each week, I'd recommend giving it a try.  Here are the songs that he's talked about so far.

I Saw the Light--Hank Williams, Sr.

We've now passed through the Revolutionary War and have move on to the early years of the United States of America in our read alouds.  Carry On, Mr. Bowditch by Jean Lee Latham is a great story that traces the life of Nathaniel Bowditch, an early American mathematician and navigator.  Nat Bowditch was a smart boy who would have been able to go to Harvard, but after his mother died, the family couldn't afford it.  He was indentured to a ship tackle store.  Because he was "good with figures" he soon picked up astronomy, navigation and many other scholarly pursuits.  He went on to become a ship's navigator and eventually a captain.

The boys all really liked this one.  I liked that it focused on a boy who became successful because of his brains.  The book was filled with navigation, shipping and boat jargon, some of which the author explained and some not.  Ben said today that he was going to "turn in all standing."  That's when the shipmen went to bed in their clothes because they knew they would be up again soon to fight a storm.  It's fun when some thing like that from a book comes up again later in our conversations.  The only criticism that Ben had of it was that everyone died.  Nat's mom, grandma, sister, wife, brothers, and a lot of other people in the book died.  I told him though that people didn't live as long then as they do now.  And shipping was a very dangerous industry.  I liked that about the book.  It made it more authentic.
2 comments:

After reading Johnny Tremain, Toliver's Secret by Esther Wood Brady just didn't compare.  While it's an interesting story a young girl in colonial America, the characters were not very well developed.  The young girl even had to dress up like a boy to have her adventure.  Weren't girls having adventures as girls in colonial America?  Maybe not.  If you're looking for a great book about this time period stick with Johnny Tremain.  It was a pretty quick read though.  I do appreciate how our curriculum does try to teach history through these read alouds.  I think the boys have all gotten a pretty good picture for this period in our country's history.
No comments: