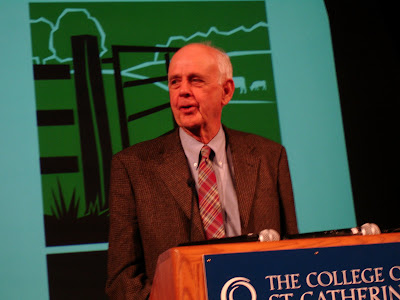 The Story of a Wendell Berry fanboy

Having been a fanboy of lesser people and having had a chance to meet some of them, I was somewhat prepared for my evening on Friday. What can one expect from a short encounter with someone who one has put on a pedestal and even sought to emulate? One can expect disappointment. So I tried to go into the Wendell Berry reading working to keep my expectations in check. I got there a little early and was able to get a seat right on Mr. Berry's left shoulder. There were two other author/poets that shared the bill with him. He read first though. He read an amazing poem about hope that left me with tears. He then read a new story of Burley Coulter. Burley is one of the central characters in his Port William fiction series. Hearing Mr. Berry read the story in Burley's slow southern drawl made me feel as if I were with him around the fire, hearing a story, while sipping "White Lightning" after a coon hunt. This was the highlight of the evening.

After Mr. Berry read, the two other guests read from their work. It was good, but paled in an
unfair comparison. After the these readings there was a short break during which, I reached to touch Mr. Berry's arm to thank him for coming. His arm was old. It felt like the arms of other old men I'd known, Grandpa, men I grew up with. He was thin and his skin was loose. This was not what I expected from the long-time farmer. His age continued to show during the subsequent question and answer session. He needed to have each question repeated and frustration with the microphone was ongoing.

After the reading ended, around 9:45 pm, there was a reception with all locally grown food. (The food was delicious. It really is different.) During this time, many people lined up to have Mr. Berry sign their books. After my food, the line had died down and I took my copy of Hannah Coulter out for his signature. I told him my name was "Andy" and he seemed to think that was a good name (His most recent book is entitled Andy Coulter: Early Travels.) While he was signing I asked him "Is it difficult for you to talk about these issues outside of a relationship with Jesus?" He didn't hear me, but answered, "I've been talking about these issues for years. Its not hard. The problem is I'm going deaf. I can hardly hear."

The evening was great. I do not get many opportunities like this. My reading of his work will be different for the time that I was able to spend there. 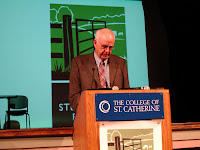 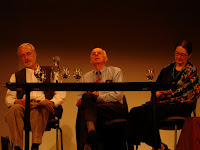 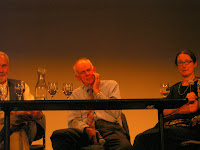 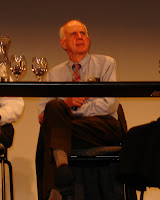 Wendell Berry's difficulty hearing made me think of my mom and Grandpa. They were so embarrassed by the fact that everything had to be repeated. It was kind of you to just let it go when he didn't hear your question correctly. You're a sweet person Andrew. I'm glad that you were able to hear him read. I'm sure it will add an extra dimension when you read his work.

Fabulous. Absolutely fabulous. Wonderful. What a gift. Great post. I felt like I was there...and wished I was.
Tricia