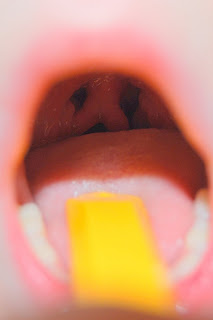 As I mentioned in my earlier post, Amanda went to the doctor on Saturday morning and found out that she had strep throat. As usual, the doctor gave us a tongue lashing about not having taken the kids to the pediatrician when they threw up and had sore throats and fevers last week.

SIDE NOTE: It seems to always be the case that if, like we did when we were new parents, we take the kids to the doctor, they tell us that they are "normal" and that nothing is wrong. If we don't take them to the doctor, then we get in trouble when we finally do contact the doctor's office. Have other people had a similar experience?

So long story short, Amanda called the doctor's office and the nurse said, "Of course they all need to come in!" Amanda just called me and told me that all four of them have/had strep. She is currently waiting for the prescriptions to be filled. My throat is tingling. I'm sure I'll be there later on in the week. As I've said before, our house is a little petri dish. The above picture is of Ben's tonsils from earlier in the week. Nothing is wrong with his uvula it is always like that :)

The problem faced by all parents of preschoolers....."Should I take the kids to the doctor????" With three kids born in three years I spent A LOT of time in the doctor's office. Some of the visits were needed and some were not. Oh well! Everybody made it in spite of us not knowing what we were doing half the time. So sorry that everyone is not feeling well. They'll soon be themselves now that they have "the pink stuff".

After spending time with your family last weekend, I developed a sore throat that lasted for just a couple of days which turned into a cold. ~Worth it to be able to hold Miss Molly :) ~

Nothing major though like everyone there. Get well soon!!

Hope everyone feels better soon! We were just in with Evelyn... we understand! Have a good one!