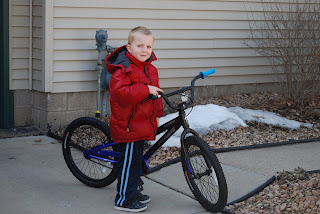 My first bike was a blue banana seat number that we bought from Timmy Neldred who lived a few streets over. I think I may have even gotten it after Joe was done with it. I remember crying over it for some reason. I played the "Why do I always get handy-me-downs?" card a lot growing up. I am hoping that Caleb and Matt do not have similar issues, but if they do I think I will have a similar response to my parents. "Zip it! There are a number of kids in the world that would love to have that ___________!"

All that to lead into our purchase last weekend of Ben's new bike. The bike that he had before was given to us by Ben Arendt. Towards the end of last summer and especially this spring when Ben road that bike he looked like a clown at the circus. So I went to the bike store and got him a new one. It was fun to see his face yesterday when I pulled tarp off of his new bike and he said, "Blue is my favorite color!" The bike is a little big, but I think that it will be perfect for him by mid-summer.

Nothing beats a new bike when you're Ben's age...I loved the bike-ride he and I took together to his school last summer.

Ben looks great on his new bike! It's a cool one. He is growing so fast now and changing so much. I'll be glad to be able to spend some time with him and the rest of the kids this summer.

alas, the common phrase of "zip it".
this "baby" understands the hand-me-downs. i must admit, it developed my obsession for thrift stores!
...if only i can mature into a freegan.